As pressure builds from special interests for the federal government to ditch its preference for LEED certification of buildings, the latest version of LEED has been approved, making it more powerful than ever.

Members of the US Green Building Council (USGBC) voted overwhelmingly (85%) to include Cradle to Cradle certification in the LEED V4, which will even more stringently enforce the environmental qualities of materials used in green buildings, the opposite of what industry interests want.

“We salute the USGBC’s courageous leadership in making material health a priority in the face ofimmense challenge from industry,” says McDonough. “The stand they have taken will help continue their meaningful input as an agent of market transformation.”

Those seeking LEED certification will get credits for Materials & Resources for disclosing and optimizing where building materials are sourced and purchased. 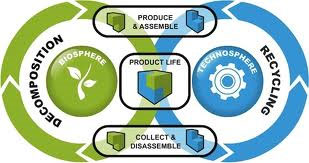 Buildings that have at least 20 Cradle to Cradle Certified products can earn points, or a project must use “at least 25%, by cost, of the total value of permanently installed building products.”

For wood products, the credit requires products “certified by the Forest Stewardship Council(FSC) or USGBC-approved equivalent.” Reused or recycled materials are the other primary means for achievement of this credit. Products sourced within 100 miles are valued at 200% of their cost.

During the LEED v4 comment periods (six over three years)  there was intense debate about how high to set the bar for materials and resources. FSC argued for maintaining a high bar, using the credit to require key environmental protections and recognize the top performers in any given sector.

“With the debate over LEED v4 standards now settled, we expect companies in the FSC marketplace to benefit from a new level of certainty and demand in the green building sector,” says FSC. “We also know there are businesses, including forest landowners, mills and lumberyards, that have been waiting on the sidelines to see how the debate would resolve before committing to FSC certification.”

Background on Cradle to Cradle

Braungart and McDonough began collaborating on Cradle to Cradle back in 1991 before the USGBC formed in 1993. McDonough used those “waste into food” concepts to design buildings before LEED came on the scene, such as Oberlin College’s Adam Joseph Lewis Center – a building that harvests more energy than it uses, cleanses its own water, and even produces food.

The essence of Cradle to Cradle is the importance of a closed loop – that only materials and processes that can be re-used  endlessly should be included in product design. And that if these guidelines are followed, humans can live in a world of abundance.

1. Their use of environmentally safe and healthy materials
2. Materials are designed for recycling or composting at end of life
3. Manufacturing must make use of renewable energy and carbon management
4. Water stewardship
5. Social fairness

It began by certifying products and has since inspired a Cradle to Cradle community in the Netherlands, Park 20|20, and Make It Right, which has built homes using the concepts since Hurricane Katrina (the nonprofit was launched by McDonough and Brad Pitt).

Companies that have earned the certification range from leaders in the furniture industry – Herman Miller and Steelcase – to Shaw in carpeting, from Alcoa in aluminum manufacturing toPuma’s closed loop clothing line and Method’s laundry detergents and cleaning products.

Their groundbreaking book, Cradle to Cradle: Remaking the Way We Make Things, published in 2002, has been followed by a new book, The Upcycle: Beyond Sustainability – Designing forAbundance.

Here’s an excerpt from their first book, Cradle to Cradle:

Consider the cherry tree: thousands of blossoms create fruit for birds, humans, and other animals, in order that one pit might eventually fall onto the ground, take root, and grow.

Who would look at the ground littered with cherry blossoms and complain, “How inefficient and wasteful!” The tree makes copious blossoms and fruit without depleting its environment. Once they fall on the ground, their materials decompose and break down into nutrients that nourish microorganisms, insects, plants, animals, and soil.

Although the tree actually makes more of its “product” than it needs for its own success in an ecosystem, this abundance has evolved (through millions of years of success and failure or, in business terms, R&D), to serve rich and varied purposes. In fact, the tree’s fecundity nourishes just about everything around it.

The Cradle to Cradle Certified™ Program Integrated as a Key Element of LEED, a Globally Adopted Green Building Program

Construction Specialties Press Release, June 26, 2014 Construction Specialties, Inc. (C/S), a leading manufacturer of high performing specialty building products, has announced its line of Acrovyn® Doors has received Cradle to Cradle certifications for its standard door models at the Bronze level, making them the first such products in the building products industry to receive […]

Inhabitat interviews William McDonough about all things Cradle to Cradle. The thought-provoking and energetic conversation gives you a taste of how intimately intertwined design is with a product’s real-world impacts.

Version 3 of the Cradle to Cradle CertifiedCM Program is Released

The Cradle to Cradle Products Innovation Institute released the new version 3 of the Cradle to Cradle Certified program. The announcement was made at the Greenbuild Expo 2012 in San Francisco, CA with the support of many longstanding clients in the green building industry. The new standard will go into effect on January [...]

read more: Version 3 of the Cradle to Cradle CertifiedCM Program is Released

Bridgett Luther of C2CPII gives an overview of Dan Probst of Jones Lang LaSalle thought on the benefits of C2C in the built environment.